The world is ending. Your merchant account has been closed. What do you do now?!

If you suspect your acquiring bank is going to close your account, your acquirer has issued a notice for an upcoming closure, or your processing agreement has actually been terminated, there are several things you need to know.

A terminated processing agreement and closed merchant account has several long-term ramifications that will impact how a business operates.

Merchant Accounts Are a Line of Credit

The first thing business owners need to understand is that a merchant account isn’t a depository account like a consumer checking or savings account. A merchant account is a line of credit. In fact, there are two lines of credit used to facilitate a single credit card transaction.

Minor Missteps Could be Costing You Major Revenue

What you don’t know can hurt you: our Merchant Compliance Review optimizes your chargeback responses for maximum profitability.

There is always risk associated with any line of credit; merchant accounts are no exception. There are several high-risk situations that could happen in the period of time between the acquirer’s deposit in the merchant account and the cardholder’s payment. All of these situations would cause significant losses for the acquirer:

Acquirers rightfully look after their own assets. If the bank suspects elevated risk brought about by a particular merchant, the safest option is to simply terminate the processing agreement and close the merchant account.

Why Merchant Accounts Are Closed

A canceled merchant account usually results from one of three things: 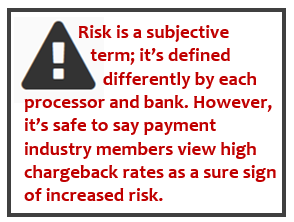 It is important to remember acquiring banks and processors are like any other business; they must carefully assess risk in relation to profitability. Therefore, a processing agreement will be terminated before the risky merchant can become a liability.

Unfortunately, “risk” is a subjective term; it is defined differently by each processor and bank. However, it is safe to say all payment industry members definitely view high chargeback rates as risky.

However, it’s probable that a merchant account will be closed long before the card networks’ thresholds have been breached.

Merchant account reserves are common practice for high risk payment processing. Because of the increased risk level, acquirers withhold a portion of the merchant’s revenue to cover potential losses. The bank will use the reserve account to cover losses if the operating account doesn’t have sufficient funds.

The amount to be withheld will be laid out in the merchant agreement. Some banks will require a reserve upfront. For example, the merchant might be required to provide the equivalent of one to two months’ worth of anticipated sales. Or, a rolling reserve will hold back a percentage of sales each month.

Other times, the need for a reserve account could be triggered by seemingly risky behavior. For example:

If a hold is newly implemented on a merchant account, it should be seen as a warning sign that trouble is brewing.

Merchants who experience an unexpected revenue hold or don’t receive a regular deposit should not assume a technical glitch is at fault! Take action right away.

Merchants need to contact their account representative or the processor’s customer service department immediately to find out what is causing the issue. If possible, the merchant should try resolving the misunderstanding with the risk manager.

If the acquirer holds funds, it is an indicator that the merchant account will probably be closed before the end of the month.

If funds weren’t withheld before the processing agreement was terminated, money will be held after the account is closed. Again, the amount withheld will depend on the merchant account agreement. However, merchants can expect the acquirer to retain revenue to cover at least all the open authorizations.

Usually, the acquirer will freeze the merchant’s funds for several months. If recent customers file chargebacks, the bank needs to be able to reimburse those cardholders.

If your merchant account has been closed, long-term ramifications will impact how you do business.

8 Steps to Take After a Terminated Processing Agreement 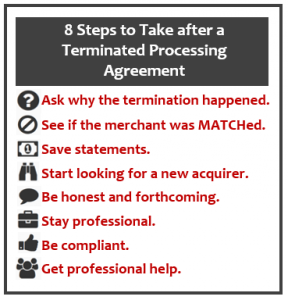 A canceled merchant account is a serious setback for a business, but it doesn’t necessarily need to be the death blow that kills the endeavor.

1. Ask why the termination happened.

Merchants shouldn’t assume they understand the reasoning for the account cancellation. It’s important to know the absolute truth. Plus, merchants will need to provide a written statement from their previous acquirer when applying for a new merchant account.

2. See if the merchant was MATCHed.

The MATCH List (Member Alert to Control High-Risk Merchants) is a database with information about businesses and owners whose merchant account has been canceled. The networks require banks to report all terminated merchant accounts to the MATCH List.

Ensure the business has, in fact, been MATCHed. The application process for a new merchant account is different for businesses that have not been placed on the MATCH List.

Merchants should have at least the last six months’ worth of processing statements. Before losing access to the acquirer’s online reporting system, merchants should double check they have all the necessary paperwork.

4. Start looking for a new acquirer.

Placement on the MATCH List following a canceled merchant agreement isn’t ideal, but it isn’t an impossible situation to overcome. It is possible to secure a new merchant account.

Merchants shouldn’t waste their time contacting regular acquirers though. Financial institutions like First Data or Bank of America won’t sign a business with a terminated merchant account. Merchants need to recognize their limitations. Instead, go straight to a high risk merchant account provider.

5. Be honest and forthcoming.

Many merchants are tempted to make their situation seem better than it is. They assume this makes them more appealing to the prospective acquirer. In reality, it is a damaging tactic that will probably backfire (most likely in the form of increased rates).

The acquirer will learn of the merchant’s past indiscretions anyway; it is best to acknowledge them upfront so as not to sacrifice the acquirer’s trust.

It takes a long time to underwrite a high risk account (much longer than a traditional account). Don’t try to rush the system. Relax. The acquirer probably dislikes the excess paperwork just as much as the merchant!

Acquirers will scrutinize any new merchant, but will be especially cautious of those with a previously canceled merchant account. The bank will carefully monitor the merchant’s activity to ensure the new account is compliant with the current merchant agreement.

As long as merchants are fully compliant with all aspects of the merchant agreement, they shouldn’t have anything to worry about.

A terminated merchant account is evidence of insufficient chargeback management techniques. Merchants who don’t seek help the second time around are destined to repeat their same mistakes

If your merchant account has been canceled or is in imminent danger of termination, it is imperative that you contact Chargebacks911 as soon as possible. You’ll be faced with numerous hurdles, including issuing refunds to customers, retrieving revenue, and managing future chargebacks. We can help, but in situations like these, you don’t have a moment to lose.

Chargebacks911 offers a guaranteed ROI. If our services aren’t a good fit for your business or we can’t help you with your current predicament, we’ll let you know.