Chargeback and representment amounts don’t necessarily need to be for the full transaction amount. How do cardholders and merchants determine the correct amount and validate their claim?

Cardholders have the right to file one chargeback for the full amount or several partial chargebacks, as long as the total chargeback amount doesn’t exceed the original transaction amount.

It's Time to Fight Back Against Chargeback Fraud

Learn how a proactive strategy can prevent unwarranted disputes.

Merchants have the option to dispute a chargeback with a lesser representment amount.

According to the card network regulations, merchants can use a decreased representment amount. The real question is should the merchant offer a lesser refund.

Each chargeback must be handled on a case-by-case basis. However, there are certain things to consider regardless of the situation at hand. 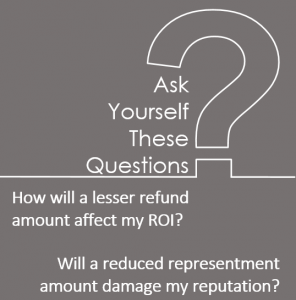 If a merchant fights a chargeback and wins, the issuing bank has the right to file a second chargeback (as defined by MasterCard, Visa calls this process a pre-arbitration chargeback).

A second chargeback is used when a cardholder or the issuing bank wants to continue disputing the original transaction. For example, the bank might change the reason code and continue fighting the merchant with a new argument.

Second chargebacks aren’t included in the chargeback-to-transaction ratio and won’t negatively affect the business’s chargeback rate. However, the time and energy required to continue fighting will increase costs.

If a merchant receives a second chargeback and the representment amount was less than the original transaction amount, the merchant has just increased costs for a process that had limited ROI to begin with.

Not only is chargeback representment a valid method for regaining revenue, it is also an essential tool for repairing a damaged reputation.

Each chargeback filed against a merchant implies guilt before innocence. If a merchant doesn’t fight back against illegitimately filed chargebacks, that guilt is solidified in the minds of the issuing bank officials. Inaction is like a merchant pleading guilty in a court of law.

Bank officials will remember that "guilty" behavior the next time a cardholder wants to file a dispute: “Well, the merchant was guilty last time; There's a good chance he's guilty again.” More chargebacks will be issued with less due diligence because of the merchant’s now damaged reputation ... which, of course, only serves to damage that reputation even more.

When merchants respond with a lower representment amount, it is synonymous with admitting guilt; the merchant takes partial responsibility.

Submitting a lower representment amount might seem like a viable way to avoid second chargebacks; the merchant meets the cardholder in the middle and offers up a mutually-beneficial resolution. That might be a good short-term strategy--and it may make this particular client happy--but the long-term damage to the merchant’s reputation could be irreparable.

Will a reduced representment amount inflict long-term damage to your reputation and bottom line?

There are only three sources of chargebacks:

The temptation to use a reduced representment amount is most likely tied to chargebacks resulting from merchant error. For example, the merchant shipped two shirts; one was the correct color, the other was not. If the cardholder filed a chargeback for the entire amount, the merchant could counter with a refund for just the incorrect item.

If a business eliminates all merchant error, there would be no need for a reduced representment amount. Fortunately, it is possible to eliminate these types of chargebacks. Better yet, merchants can eliminate merchant error and criminal fraud.

After merchant error and criminal fraud have been eradicated, that only leaves the third type of chargeback: friendly fraud.

In cases of friendly fraud, consumers, not the merchant, are guilty and should be held 100% responsible for their actions.

Chargebacks911® offers the products and services necessary to successfully prevent merchant error and criminal fraud. We also offer the industry’s most efficient solution for disputing friendly fraud. If you’d like to learn more about the options available for your business, contact us today.

Before offering a reduce representment amount, carefully consider your motives for doing so. Will it successfully meet your goal without inflicting long-term damage to your reputation and bottom line?